May 09, 2015
The people of the UK have just voted in a new government, and in local authorities across the country, thousands of councillors have been elected. 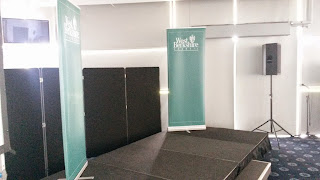 For the past few weeks I've been involved in a small way, in the electoral process and over Thursday  and Friday I worked 27 hours out of 32. Some of my colleagues continue today, for the count of the parish elections.

Prior to the election, working with Democracy Club I helped them produce their polling station finder. When I say I helped them, we gave them some data, they put in the long hours of creating and refining the finder, and I did a bit of bug testing.

I wrote a lot more about why the polling station finder is a good thing here.

The polls opened at 7am on 7 May and we were able to offer voters not only the location of polling stations in our district, but neighbouring Reading Borough too. This is a model that I've talked about for a while. Civic coders, or perhaps even a GDS Local producing common functionality that can be embedded in council sites, spanning borders so offering a better service. Developing it once rather than hundreds of times, so it's a lot better value for the taxpayer. 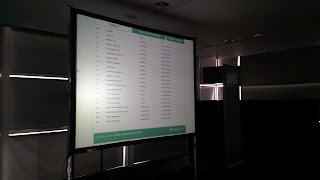 The main barrier to nationwide coverage was some councils' unwillingness to release data in response to Democracy Club's FOI request.

When the polls closed at 10pm the process of verification and counting started. We'd developed something to allow people both in the room on large screens and out in internet land to keep up with the various stages of the count.

Using a simple spreadsheet as a database powering an application, we were able to tell people on which counting table each ballot box was, and whether it was being verified or counted.

For the Parliamentary count there was just one result which was announced at 5.30am and after a few hours sleep, everyone was back at 10am to start on counting votes for district councillors on the unitary council. 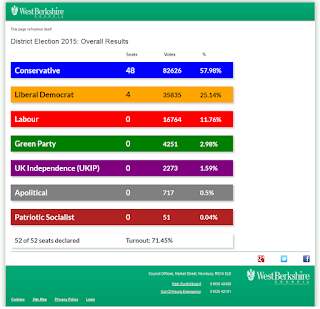 For this we'd developed something additional. Based on the Modern.Gov API we were able to show the overall results as they happened, updated seconds after the Returning Officer had finished announcing it on stage.

We've put the election results code on GitHub, free for anyone to use. Again, this could be a model for a GDS Local, producing common functionality that many councils can use. I'd love to see someone else use this for their council elections next year, and I'd be happy to help them set it up.

As well as being available on the big screens we put all of this online, which means those not able to attend the count were as up to date as those in the room. We tweeted each district result too, linking back to the full results.

There's two encouraging things about this for me:
It was the Returning Officer that asked for the election count and results dashboard. It's great that the person in charge of the electoral process got how digital communications can be used to keep people informed.

It proved that the creation of shareable digital products for the dissemination of democratic information, both by civic coders and councils, is possible.
With no General Election for five years, perhaps the focus of coders might turn to local governments, some of whom have elections most years. I really hope the case, and watch this space for an event to help promote this, later in the year.

One final thing. We thought we were the only count with a glitterball but it turns out Oldham went one better and had a full on disco, as pictured below. I've made notes for next time. 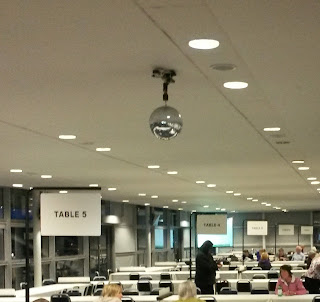 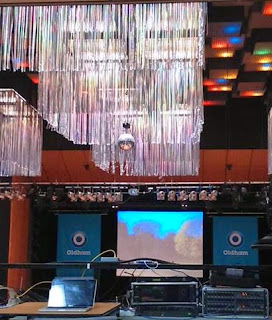 November 30, 2014
I'm writing this partly as a reply to an excellent piece that Carl Haggerty published about the disconnect between internal and external influence and partly due to various conversations over the past month about how to make using tools like collaboration platform  Pipeline common practice. This isn't really about Carl though, or Devon County Council, or any other council specifically, it's more a comment on the influence of digital teams in local governments, or lack of, and how to resolve this. So here's the question that prompted this piece. How can someone who's been recognised nationally for their work, first by winning the Guardian's Leadership Excellent Award and who has more recently been placed in the top 100 of the Local Government Chronicle's most influential people in local government , "sometimes feel rather isolated and disconnected to the power and influence internally". First, let's consider whether is this a problem to
16 comments
Read more

June 12, 2016
For the past month I've been putting together a paper on the next steps of digital transformation, for the organisation I work for. I'm proposing we look at two capabilities and two business areas, and if approved I'll be writing more about it. It's been a great exercise in gathering my thoughts and helping me to define digital transformation to a wider audience and how it fits into the bigger picture of service improvement. Here's some of the stuff I've learnt or had affirmed: Transformation, digital or not, starts with understanding the needs of the user through research. This should be obvious, but in local government too often I've seen "build it and they will come" approach applied. It's unlikely a commercial operation would launch a new product without first researching the market, so why would a digital service be any difference? A couple of years ago I wrote how the phrase "digital transformation" was hindering digit
3 comments
Read more